I first went to Liberia to shoot an independent documentary, looking at how people move past the atrocities of war.

In the weeks I spent in Liberia, I heard war stories about the 250-thousand who were killed, spoke to women who were raped by fighting factions, and listened to young adults who spent their childhoods with a gun in their hands as they were forced to become child soldiers.  The horrors Liberians endured over 14-years of civil war are beyond a nightmare.

But it is a new dawn for Liberia.  The country held a peaceful election this month, following eight years of peace. It’s not unusual for ex-combatants and those who suffered at their hands to live just miles from one ther and even see each other at the market.  I have never seen a population of people so willing to forgive and let go of the past just for a chance at happiness.

In the midst of a wide range of challenges in rebuilding this post-conflict country, small solutions are sprouting. That’s where my journey for ABC News’ Million Moms Challenge in Liberia begins.

Arriving at Robertsport Airport in Monrovia with boxes upon boxes is Dr. Laura Stachel: a dark haired, thin and spunky obstetrician-gynecologist from Berkeley,  California, with her engineers Brent Moellenberg and Christian Casillas.  A small team with a big mission: to bring solar powered light to at least 20 clinics in rural Liberia in days.

More than half of Liberia does not have electricity. Generators are common, but often too expensive to use.  Dr.Stachel figured out years ago, during a research medical mission in Nigeria, that maternal mortality rates could not be reduced without addressing basic needs first.

Light is needed to see a birth canal, light is needed to see a vein to put an IV in. Light is needed to check the dosage of medicine; power is needed to run medical monitors.  So in her California garage, Dr. Stachel and her solar engineer husband, Hal Aronson, invented an easy-to-install solar light system, which includes solar panels, a battery and a LED light kit. The more than 70-watts of power is packed in what looks like a small carry-on suitcase. The original idea was to make something easy to get through customs.

What’s amazing is this compact light system is built to last 20-years, making it a perfect tool for clinics that would not be able to afford a replacement.

Working with me was British photojournalist Marina Parker.  Our mission: to capture the We Care Solar Journey.

We all caravan from the city of Monrovia to rural Bong County.  That’s about seven hours of dirt roads. Our first night was spent in a “hotel” with no electricity, no running water and mattresses on the floor.  That means a bucket shower, but there was no water in the bucket. So, no shower, no flushing the toilet and certainly no hot coffee in the morning.  A glimpse into everyday conditions rural Liberians live with.

At sunrise we head to a training session at the county’s hospital, which the Ministry of Health and World Health Organization helped arrange.  Dr. Stachel teaches eager midwives how to use the solar systems. They soak up the information and during a break, they read a heartfelt thank you letter, composed on the spot, for the We Care Solar Team.

At the training we learn that this country of almost 4 million people has only about 100 doctors after most fled during the war. The government has made a effort to increase the number of midwives.  Many of those midwives have taken their training into the villages to train traditional midwives, encouraging them to get pregnant women into clinics instead of delivering in their village homes.

The following day we go to rural clinics and shoot the We Care Solar Team climbing on roofs and hammering away as they install solar panels.  At one rural clinic the statistics sunk in; we’ve been hearing about Liberia having one of the highest maternal mortality rates in the world.  At the clinic we met Moses Dolo, who is mourning his 35- year old sister Teresa, who died recently. He said, ” Before, I was happy, but now I’m a sad man.”

The rural clinic near Teresa’s village could not handle her bleeding during labor.  She was sent to the main hospital, a two- hour drive away on dirt roads.  Teresa’s baby was born in the car, but Teresa died before reaching the hospital. Dr. Stachel turns to Marina and me and says, ” It was a hemorrhage, this does not kill women in the western world.”

With more solar energy kits to install, the We Care Solar Team is off to another clinic. Night falls.  A woman is in labor.  Dr.Stachel and a Liberian nurse begin delivering in the dark.  The only light source is from a small flashlight.  Christian and Brent are outside working as fast as they can to install a pre-charged solar kit.

The labor is difficult.  A young 20-year-old woman named Mapu is lying on the floor as midwives hold her legs apart.  She’s screaming.  Apparently there is no pain medication.  I steady the boom microphone in my arm on a table and notice I’m landing in a pool of blood. I think, “This is what giving birth in rural Africa looks like.”

More screams. Everyone is sweating in the heat.  The nurse starts talking about transporting Mapu to the main hospital.  All I can think about is, “Will Mapu have the same fate as Teresa?”

It is hours to the hospital on very bad roads. In fact, to get to the clinic, we took the risk of driving our jeep through a river because the only bridge on our route was falling apart.  I worry –  Mapu cannot leave, I imagine she will die on that long journey to the hospital.

Another scream.  This one for joy.  The installation is complete and the solar lights come on.  A big sigh of relief.  Now Dr. Stachel and the nurse can see what they are doing.  They are able to give Mapu some sugar water through an IV.  This gives her more energy.  The nurse no longer insists on transferring Mapu.  About two hours have passed.  Marina is steady as can be with her camera taping all of this.  Mapu is exhausted and begins to roll over on the floor.  Dr. Stachel wipes Mapu’s face with a wet cloth.  Next Dr. Stachel takes Mapu’s hand and stretches it between her legs to touch the emerging head of the baby. She tells an exhausted Mapu, “Feel your baby, it’s almost out”.  Mapu feels the head of her baby and gains the strength to push.  A baby boy is born.  Born into a peaceful country.

“Who would have guessed that bringing a little suitcase full of light could do so much,” Dr. Stachel says.

It is a hopeful moment,  a chance for more babies to be born into a brighter Liberia.

Please see the news clip and the related articles:

STORY AS IT APPEARS AT ABC.COM
Million Moms Challenge: Let there be light
REPORTER’S NOTEBOOK
By SEEMA MATHUR, ABC News 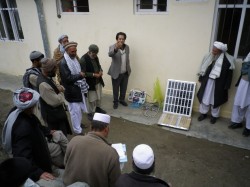 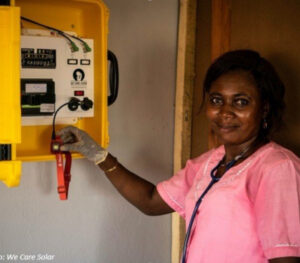 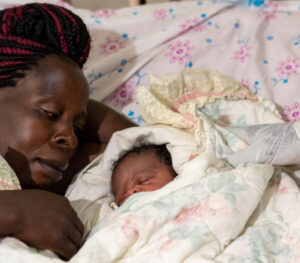